I’m going to take you behind the scenes of Zipify’s 8-figure Shopify store to break down some of the new split tests we’re running with OneClickUpsell.

Split testing is a major part of any modern marketing strategy, and in this video you’ll see how we’re using OCU’s new split testing functionality to test 4 different upsells to generate more revenue and grow our store.

I’ll also use this opportunity to steer you away from some common misconceptions, and hopefully give you inspiration to run a few of these split tests on your own store.

Afterall, split tests are a major money-making opportunity for your brand, and they’re one of the few ways to increase revenue without buying more traffic.

If you aren’t familiar with split testing, check out this quick explanation from the Shopify blog:

“A/B testing, sometimes referred to as split testing, is the process of comparing two versions of the same webpage to determine which one performs better.

This process allows you to answer important business questions, helps you generate more revenue from the traffic you already have, and sets the foundation for a data-informed marketing strategy.”

Until recently, it was next to impossible to run your own split tests without hiring a full-time developer.

But now, thanks to the built-in split testing features of apps like OneClickUpsell and Zipify Pages, you can test as many pages and offers as you like — no expertise needed.

So let’s jump into the first split test I want to show you.

The Boomstick Trio is one of our most popular products, and for this test I wanted to see whether offering 1 Trio as an upsell would generate more or less revenue than offering 2. 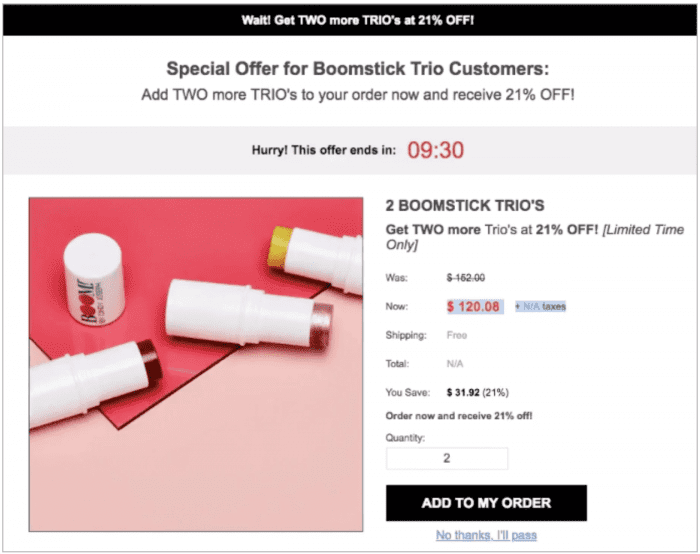 This was testing the difference between a $60 upsell and a $120 upsell, and the results were pretty interesting:

Upsell A is the $60 single Trio, and even though it had more than double the conversion rate at 9.33% vs 4.48%, the actual difference in revenue per visitor was a heck of a lot closer:

That’s why it’s a common misconception to always use conversion rate to define a winner and loser of your split tests.

Because if Upsell A is half the price of Upsell B, then you only need to convert half as many visitors for upsell B to generate the same amount of revenue. Make sense?

So for this test, the most important metric was not conversion rate but value per visitor, and even though upsell A still won, it wasn’t by much.

The second test I want to show you is from the downsell of the same Boomstick Trio funnel above.

I tested a 4oz jar of our Boomsilk moisturizer at 15% off vs. a size of their choosing at 15% off: 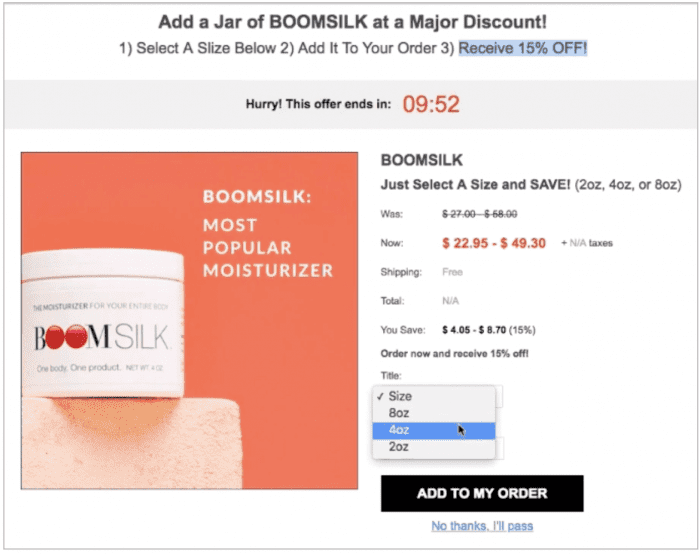 Here are the results:

It turns out that the 4oz jar won, and removing the added step of choosing a size was worth an extra 8¢ per visitor (or 6% more revenue) for this downsell.

And I kind of agree, but I also really wanted to try it, so I decided to do it anyway for one of our most profitable products, Boom Nectar. (Hey, this is why we give you unlimited split tests!)

So the only difference in this test is that Upsell A had a green button and Upsell B had a black button: 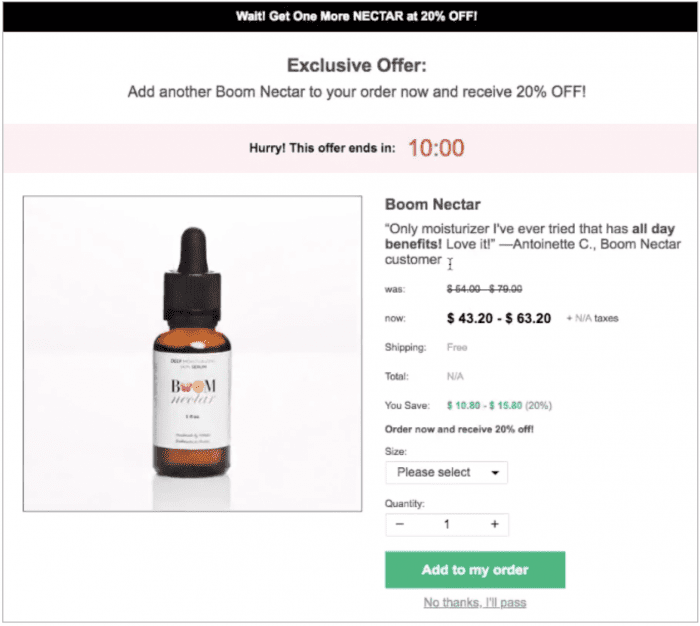 And guess what? Black (Upsell B) won by almost $1 per visitor!

That seems like a huge difference for something so small, and I definitely didn’t expect to discover a 12% lift in this test.

This time I’m offering our 8oz Boomsilk moisturizer at either a 15% or 20% discount.

So here’s what the whole upsell funnel looks like:

If you buy Boom Nectar, the first upsell you see is the green vs. black button upsell from Test #3 offering a second bottle of Nectar.

Then, if you take this first upsell, OCU will present you with the following second upsell of 8oz Boomsilk moisturizer at either a 15% or 20% discount: 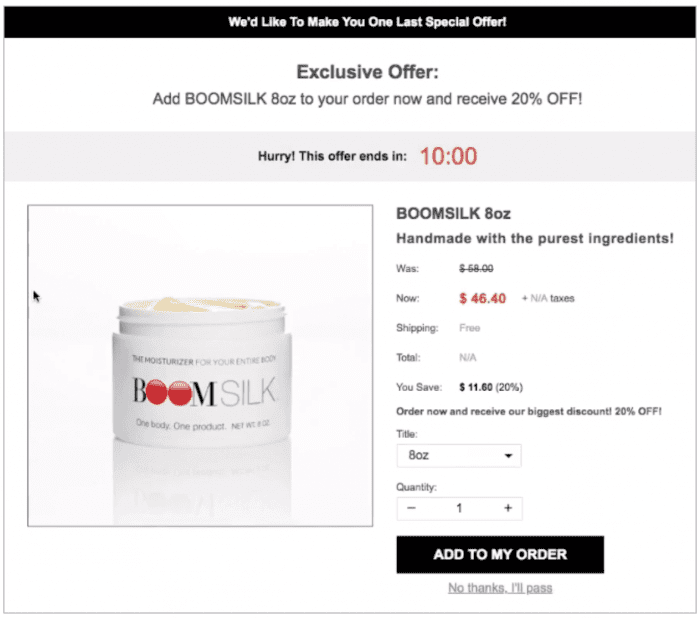 Nothing else was changed between Upsell A and Upsell B except for the discount, and the results were incredible:

The 20% off discount is worth $1.67 more in value per visitor than the 15% discount, which means that even though we’re losing more revenue per unit due to the larger discount, it’s worth more than double overall!

This is why it’s so important to test new strategies. Otherwise you won’t know if a bigger discount is good or bad for business.

Regardless of whether or not these split test example are the perfect fit for your store, I think one thing is certain:

Offering a second upsell is an incredible revenue opportunity for your store.

Two of the four split tests I showed you took place at the second upsell level (after they take upsell 1), and the lowest conversion rate of either of them was still nearly 4%.

And recently, I’ve seen the conversion rates on second upsells rise as high as 33%. That means 1 out of every 3 people who bought that product and took the first upsell were still open to making another purchase.

So I highly recommend that if you do not currently have a second upsell triggered in your OCU flows, that you do so immediately because you’re absolutely missing out.

These were just a few of the many, many split tests we’ve been running behind the scenes of our Shopify store.

Most of all, I want these examples to inspire you to log in and try a few of these tests on your own store…

Because running split tests really is one of the most powerful marketing tools at your disposal to generate more profitable offers and grow you business.

And with the built-in functionality of both OneClickUpsell and Zipify Pages, becoming a true data-driven marketer is now easier than ever.

If you’re already a user of OneClickUpsell, get started today by logging in now or watching this tutorial on how to run a split test.

If you’re not yet using OneClickUpsell and you’d like to add split tests and post-purchase upsells to your store, you can learn more here: www.zipify.com/oneclickupsell